When using the New Game Wizard to start your project, you'll have the option to make use of AC's default interface. This is a general-purpose set of Menus designed to suit most types of adventure games, and is the same one used by the 3D Demo game. 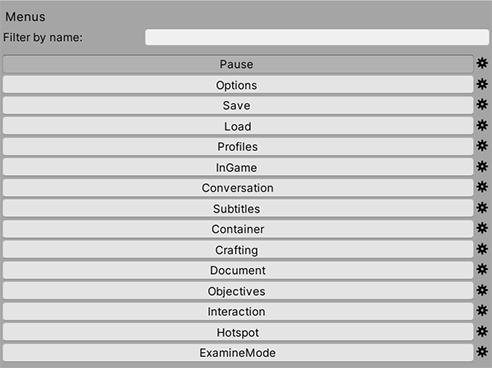 The interface comes in two flavours - Adventure Creator and Unity UI. The latter involves a separate Unity UI prefab for each Menu, so changing a Menu's appearance is a case of opening that Menu's prefab and restyling it to suit.

Adventure Creator or Unity UI? The first option is great for quickly testing out ideas and getting something workable in your game - while the second is best when you want to finalise design and polish things up.

Here, we can see the Pause menu's Source is set to Unity Ui Prefab - meaning it uses Unity UI - and so its associated Canvas prefab can be found below: 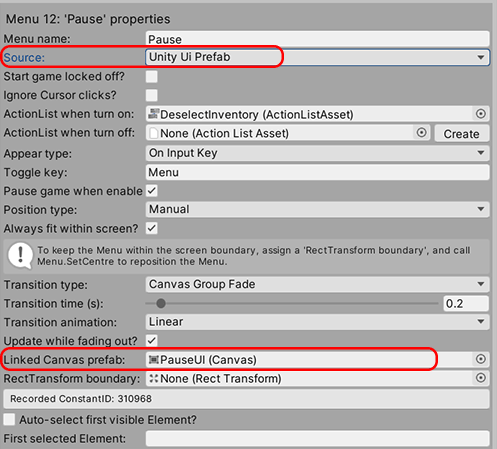 If a menu's Source is instead set to Adventure Creator that means its appearance is configured directly inside the Menu Manager itself. Here, you can see the properties box has more styling options built-in: 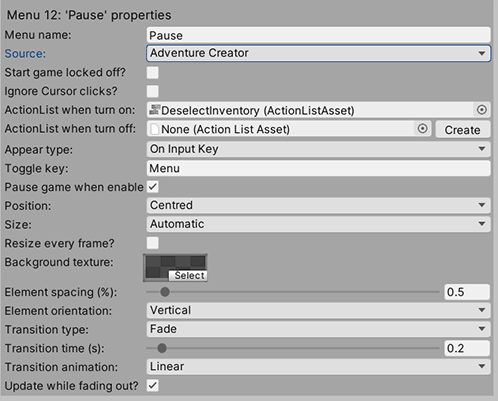 So that you can see what effect styling fields have, you can preview an AC menu in the Game window while still in Edit mode - so long as the current scene is an AC one, and Preview in Game window? is checked at the top of the Menu Manager.

By default, the "AC" Pause menu looks like this: 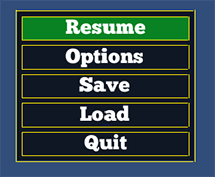 While previewing a Menu, you can click to select its various elements from within the Game window.

Let's change it so that it appears at the top of the screen instead. In its list of properties, change Element orientation to Horizontal.

The Elements inside it will be re-arranged side-by-side. This is because their Position values are all set to Aligned, which is used to simplify the layout process for simple list-type Menus.

Next, let's bring the Pause Menu to the top of the screen. Find its Position property, and change it from Centred to Aligned, and then set its Alignment to Upper Left.

Now extend it so that the grey background extends all the way across the screen. Change the Size property from Automatic to Manual, and extend the W (width) slider up to 100%. 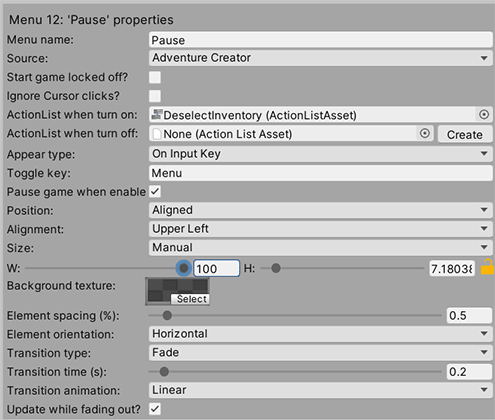 Since the Menu is now at the top of the screen, let's add a little flair and have it pan down when it turns on. Find the Transition type property and change it from Fade to Pan, and set the Pan from property to Up.

To re-style fonts and colours, we have to do this at the Element level. Click on the ResumeButton in menu's the list elements to reveal its properties 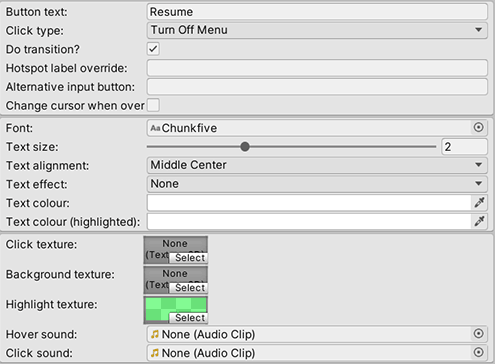 From here you can change the Button's text, font, colour, background texture and more.